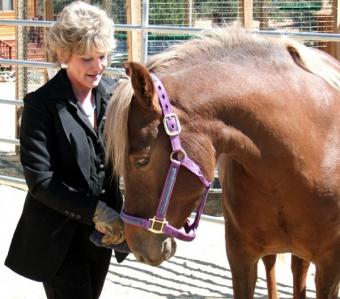 With hard-luck songs that reflected her real-life experience, Lacy J. Dalton became one of the most popular "outlaw" country singer of the early 1980s. After winning a Country Music Association Award as Best New Female Vocalist in 1979, she released a series of albums that were both commercial and critical successes. A popular concert attraction as well, Dalton sometimes played over 300 dates a year throughout the 1980s and released an album of original material almost every year. Dalton slowed her pace somewhat in the 1990s as she entered her fourth decade in the music business. Settling in Nevada, she continued to record and perform; in 1999 she established the Let 'em Run Foundation, an organization devoted to helping save wild horses.
...

Show everything
With hard-luck songs that reflected her real-life experience, Lacy J. Dalton became one of the most popular "outlaw" country singer of the early 1980s. After winning a Country Music Association Award as Best New Female Vocalist in 1979, she released a series of albums that were both commercial and critical successes. A popular concert attraction as well, Dalton sometimes played over 300 dates a year throughout the 1980s and released an album of original material almost every year. Dalton slowed her pace somewhat in the 1990s as she entered her fourth decade in the music business. Settling in Nevada, she continued to record and perform; in 1999 she established the Let 'em Run Foundation, an organization devoted to helping save wild horses.

The singer later known as Lacy J. Dalton was born Jill Byrem on October 13, 1946, in Bloomsburg, a small town in eastern Pennsylvania's mining country. Her father, who played the guitar, mandolin, and banjo, worked as a hunting guide on a nature preserve; her mother was a waitress and bartender. Both parents enjoyed singing country songs. As she later recalled in an interview with Time in 1980, "I loved the songs more than the singing. Country music is a storytelling art." Despite her appreciation of music, Dalton decided to study art at Brigham Young University (BYU) in Utah after she finished high school. She completed one year at BYU before deciding that her artistic talent was better served writing songs, singing and learning to play the guitar. She moved Minnesota, where she worked as a short-order cook and began singing with some local folk musicians. It was the beginning of a career in music, although it took more than a decade for Dalton to sign a recording contract.

Dalton's parents insisted that she come home to Pennsylvania. She complied, but left soon afterward for New York City's Greenwich Village, a vibrant center of the folk-music scene in the mid-1960s. She performed in coffeehouses and other small venues. Dalton moved to Santa Cruz, California, in 1967 to start a psychedelic rock band called “Office”. There she met John Croston, who became her partner and manager of the band. Later they spent some time in Los Angeles, where they tried to get Office's career off the ground. Dalton was offered a number of record deals at that time, but only if she would agree to leave the band. She would not and later the band broke up, but Dalton and Croston stayed together. They married around 1971 and had a son, Adam. Croston was paralyzed in a freak accident in 1971 when he collided with another swimmer in a pool. He died in 1974, leaving the widowed Dalton to support their child by working as a cook in Santa Cruz while picking up singing gigs nights and weekends.

Her personal life was also rocky after Croston's death. "I felt emotionally bankrupt," she told People in December of 1980, "but I didn't get depressed. I was delighted to have Adam. I tried some relationships, but I was choosing men who couldn't sustain them. I guess I didn't really want them to work out." Dalton later turned the experiences into fodder for the singles "Crazy Blue Eyes" and "Losing Kind of Love", hard-luck songs that she co-wrote for her debut album. Dalton eventually began a lengthy relationship with John Fitzgerald, who was in the audience at one of her local shows, and began setting her sights on restarting her music career.

With the help of some friends, Dalton recorded an album called ‘Jill Croston’. It highlighted her musical range as well as her distinctive voice. Later on, an old friend heard it, called her and together with triple scale musicians like Billy Jo Walker and John Hobbs, they created a demo tape in LA. The tape made its way to CBS/Columbia Records producer Billy Sherrill, best known for his work with country superstar Tammy Wynette. Like Wynette, Dalton had a rich emotional delivery that blended power and vulnerability. The hard-luck stories contained in many of her songs put Dalton into the "country outlaw" category, despite the blues, folk, bluegrass, and even big-band influences in her music. A People music critic best described her sound in a 1983 review, "Dalton is not particularly fond of being labeled, but if she isn't a country-rock singer, there never will be one. And if she isn't a terrific country-folk singer, there never has been one."

At Sherrill's behest, CBS offered her a contract; he also urged her to take a new name, and she picked "Lacy," a name she liked, and "Dalton," the last name of a friend. The "J." stood for her original name, Jill. With her new name and top-notch producer, her debut album, Lacy J. Dalton, was a critical and commercial success that helped her win the Country Music Association's Best New Female Vocalist Award in 1979. As New York Times writer John Rockwell noted in a 1980 review, "We live in a time that prizes strong women performers, a trend that has begun to permeate even the still, calm, conservative waters of country music.... And of all the new women singers of this sort, about the most promising is Lacy J. Dalton."

In the 1980s Dalton regularly played over 300 concert dates a year, often opening for Willie Nelson, Johnny Cash, and Hank Williams, Jr. She also released a string of albums: Hard Times came out in 1980, followed by Takin' It Easy in 1981, and 16th Avenue in 1982. The title track from 16th Avenue, a song about musicians struggling to make it in Nashville, became the biggest hit of her career. In 1983 Dalton released Dream Baby, which contained a cover version of Roy Orbison's hit of the same name. A Greatest Hits collection followed that same year, followed by a two-year hiatus from the recording studio. As Dalton explained in a Billboard interview to promote the release of her 1985 album Can't Run Away from Your Heart, "Columbia was insisting that I change producers. I didn't want to. I'd worked with Billy [Sherrill] ever since he discovered me on 'Crazy Blue Eyes'. We'd just written a song together with Mark Sherrill, Billy's nephew, which had become a BMI million-airplay song, and later we'd had hits like '16th Avenue' together. I didn't think it was fair for me to switch and I hated being forced to do it."

Dalton stayed with the Columbia label through four more albums: 1986's I Love Country; the 1987 compilation album Blue-Eyed Blues; Lacy J. in 1990; and Crazy Love in 1991. In 1992 she switched to the Liberty label for Chains on the Wind and released another greatest-hits collection on the label in 1993.

A lengthy relationship with her tour manager, Aaron Anderson, resulted in Dalton's second marriage; the couple relocated to Reno, Nevada in 1998. In 1999 they established the Let 'em Run Foundation, an organization devoted to helping save wild horses in Nevada's Virginia Range from abuse and extinction. The foundation is also working to establish a preserve in Nevada as a free-range area for wild horses. In 1999 Dalton released Wild Horse Crossing, a collaborative effort and fund-raising effort for the Let 'em Run Foundation. Every artist and other person involved donated 100% of their time and talent to the project. Dalton also plays numerous benefit shows on behalf of the foundation and in May of 2000 performed as the title character in the musical Annie, Get Your Gun in a series of six sold-out performances at the Nevada Shakespeare Festival.

In 2004, Dalton recorded her first solo independent CD, The Last Wild Place, co-produced with her then husband and partner Aaron Anderson and co-producer Tom Bocci. The CD was rated #1 on the World Country Independent Chart and the song Slip Away also went #1. A year and a half later, both Slip Away and the entire CD went #1 on the American Western Music Chart. Later Slip Away was featured in Alison Eastwood's Sundance film Don't Tell.

Today, after a split with her husband in 2005, Lacy is on her own - footloose and fancy free. To cut down on confusion with her many names over the years, she's legally adopted the name that brought her fame - Lacy J. Dalton!